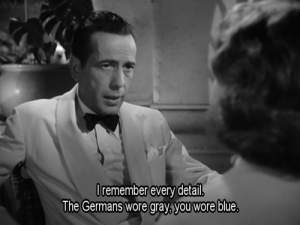 How do you get to be a genius and write lines like these? –

Rick: “Not an easy day to forget. I remember every detail. The Germans wore gray, you wore blue.”

There’s a fair amount of dispute about who actually wrote what for Casablanca. It seems that Julius J Epstein, Philip G Epstein, Howard Koch and Casey Robinson were all involved. Even Humphrey Bogart is given the credit for  “Here’s looking at you, kid”. But how do you produce these genius perfect lines? I could never do it in a month of Sundays. Possibly because I use phrases like ‘a month of Sundays’.

“By day the banished sun circles the earth like a grieving mother with a lamp.” Cormac McCarthy

“I was as hollow and empty as the spaces between stars.” Raymond Chandler

What about this one, by me – “He was tiny. As small as an underdeveloped baby dwarf ant who had been off his food for a week.”

It’s context as well. Casablanca is set in …. well Casablanca. Transfer this to Risca and –

“He was as angry as ten bears.”

And some of the idioms are particularly strange –

The English equivalent of “Don’t lift a petticoat…” is ” Don’t cry over spilt milk.” It does seem to lack the Welsh charm, though. Don’t you think?