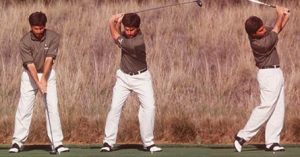 Attribution Theory by Fritz Heider basically says that there are 4 factors that affect your behaviour; ability, effort , luck and the difficulty of the task.

At the start of a round golfers usually tend to be fairly jolly, optimistic and sensible. They congregate next to the first tee swinging cheerfully and joking with the group in front; “Now don’t be embarrassed about calling us through”.

Golfers tend to think that ability and effort are factors they have a fair amount of control over, whilst the difficulty of the task and luck are outside the control of the golfer. For instance if golfers practice they expect they will get better. If they have played regularly they expect to get better. If they are playing consistently well there is a belief they will continue to play well. This is all fairly sensible. However this can often be heightened in times of even the smallest increase in stress or tension.

For instance a golfer will drive well with his glove off a couple of times then he’ll never wear a glove again – ask Fred Couples. Suddenly Fred feels he has power over a factor outside his control – luck. We shall be returning to the concept of attribution theory and luck…. But first ……

When this happens they tend to not attribute this to themselves but look at their luck, “Trust me to get drawn to play with a 24 handicap 12 year old female bandit.”

Luck, fortune, fate, destiny and providence are very interesting aspects for golfers. In times of stress they can really kick in. Even in times of non-stress it kicks in. For example we use the same coloured tees, the same hat, socks, jumper, underwear, etc. If things are going badly it’s rarely the fault of poor technique, lack of concentration or over-optimistic shot selection. It’s habitually down to luck.

“Just my luck I haven’t got a shot in.” – translation: I shanked one behind a tree

“How come I always get a bad lie.” – “Because you keep hitting it in the rough.”

Let’s make it very simply. Of the 4 elements that affect your game only ability and effort are under your control. So go practice.

John Cook marks his golf ball only with US quarters (25 cent coins that feature different US States) that reflect pictures of states in which he has not only played, but played well.

Arnold Palmer’s wife kisses each of his golf balls before he uses them in a game.

Doug Sanders refuses to play golf with white tees as he considers them to be unlucky.

Paul Azinger always marks his golf ball with a US penny, which features the head of Abraham Lincoln. He also makes certain to turn the penny so Lincoln is looking at the hole. he thinks this brings him good luck!

Christina Kim doesn’t step on the edge where the fairway meets the green, as she considers this to bring bad luck to her game.