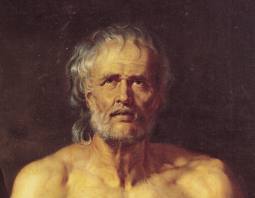 How do you deal with a bad beat? Do you shrug or tilt?

Gus Hansen answers the question, “How do you handle a bad beat?”

1. You know you’re going to lose some time

2. You know it’s going to be unfair

3. You know you have been upset in the past when this happened

4. Therefore you are likely to be upset again in the future.

It’s not a surprise that you will have a bad beat at some time.

People will be upset. It has been happening for over 2,000 years;

“Is any one surprised that he is cold in winter? That he is sick at sea? That he is jolted about on the highroad?” – Seneca – ‘On Anger’ AD 41

Seneca believed that a great deal of unhappiness was caused by ‘magic thinking’. People refuse to accept the inevitable;

You know something will happen yet still get upset when it does – it’s not rational. Deal with it.

Rationally you should have a process for dealing with this.

Why It’s Not Good to Tilt

TheYerkes-Dodson law shows that performance increases as anxiety/ arousal  increases to an optimum point beyond which performance declines rapidly. i.e. you perform better as you deal with a difficult situation until you reach a point where you rapidly decline. You manage the stress and anxiety well – then there comes a tipping point.

You need a strategy – a strategy for dealing with failure. The strategy is about honesty and realism. The measure you use is ‘increase the speed of recovery’ – How quickly can you get back to full speed after a setback.

The strategy needs to be about honesty and  realism.

2. focus on others – not yourself.

Both these strategies make it easier to take the pressure off yourself. You can regain control of the situation. No-one can  make you ‘tilt’ – only you can do this to yourself.

It won’t be easy – As you and Seneca know you won’t get it right first time. So, don’t be hard on yourself. Try gain – it gets easier.