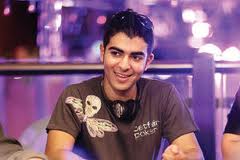 John Tabatabai. John is a Cardiff born, former Wales chess international He was the runner-up to outstanding Norwegian poker player Annette Obrestad in the first World Series of Poker Main Event in 2007 and has since won the All Africa Poker Tournament in 2008 and the Australian Heads Up Championship a year later. He has won almost $1.5 million in tournament earnings alone in the 4 years he’s been a professional. I interviewed him a few days ago.

I read that you went to Llanishen High, (largest single site school in Cardiff). How was that experience for you? Did you enjoy your school days?

High school was High School! I’m sure like every young kid overall it was fun and part of the life experience but of course there were highs and lows. I was rather fortunate to have had quite a lot of fun and some good friends there.

Having played a lot of intense chess growing up do you think that gave you a psychological advantage playing heads up?

I believe chess gave me a head start when I started playing poker, but don’t think the advantage or edge is anything measurable at the higher end of poker as all opponents are rather accomplished. Chess has helped improve my psychological makeup and perhaps understanding of other human thought processes which if so, definitely helps with HU  !

You gained a law degree from The University of Reading. Would you ever consider getting a job where you could use your degree?

Hmm…working 12-14 hours a day for someone who will probably not treat you well, not respect you doing mundane, routine tasks. Then hopefully after 10 years, maybe, receiving a promotion and then only having to work 10 hours a day with 3 weeks holiday a year. Receiving angry emails, angry phone calls from dis-satisfied clients; the list goes on. As tempting as that sounds though, I think I will kindly have to pass.

It must have been difficult moving from Wales to London. Do you think it was a good move for you?

Was not that difficult a move for me. I have moved around quite a bit and travelled a lot before so did not feel like a big deal. I went initially to Reading for 3 years where I was at University. Then the move went onto London which seemed like natural progression to me. I also knew quite a few people here so it was all good.

You  set up a business recently – Bidibot.com. Do you consider yourself an entrepreneur? How do you think you would cope on Dragon’s Den and which Dragon would you choose to go into business with?

Bidibot.com was a big venture which sadly did not work out. It was an incredible experience for me and I learnt a lot about the business world. Plenty of mistakes were made and all were lessons which I will take forward for my next venture.

I definitely have an entrepreneurial side but I’m not sure if I can be called an entrepreneur simply for creating and starting one business. Soon though, I hope to deserve that title

It is easy to answer the Dragons Den question while I am sat here behind my computer and not in their studio, under pressure in front of the Dragons, with multiple cameras staring at you and the burning heat of the studio lights penetrating into my skull. I think I would do rather well as I would prepare for all the questions they would ask and practice with my business friends. I wouldn’t go on the show if I did not have satisfactory answers to all the likely questions which would arise.

Of all the Dragons I would chose James Khan to go into business with as he always conducts himself very well, politely and respectfully even if he is not interested in the business idea. Furthermore, he seems to have a very calm and stress free attitude which is important for running a business as you need to make level headed decisions all the time and this characteristic also helps with communication between staff and merchants.

How difficult did you find it broadcasting and playing at the Ambassadour Tournament? Is this an area, or perhaps T.V. work, you’d like to get more involved in?

Initially quite difficult, but I am slowly improving. The hardest thing is to talk for one hour to yourself and keep the listeners interested. Of course when you are reading, comprehending and talking whilst playing poker it can be slightly overwhelming and mistakes happen. It’s something which I currently love doing with Betfair and hopefully the listeners find it entertaining enough to keep listening every week

I’m not sure if I would want to get into TV work. There are aspects of it which I find both appealing and unattractive. That is probably another interview in itself.

There are some parallels between yourself and Mansour Matloubi. You both have a Middle Eastern family heritage, both lived in Cardiff and London. Have you ever met him? He famously won WSOP Main Event how much of an incentive is it for you to win that event?

Strangely I have never met Mansour although I would love to of course. The fact that he won the WSOP doesn’t add any extra incentive for me to win, I have always wanted to win and will continue to do so every year which I play. I think the $10,000,000 first prize is incentive enough. It is the holy grail of poker to win the ME and everyone who plays poker, even people who don’t play want to win! It’s one of those things which no extra incentives are required. The prize is spectacular enough.

You won the All African Championship in 2008 in Swaziland. Did you get an opportunity to see any of Africa at this time, or was is just airports and hotels?

I actually ended up playing the tournament by chance as I was in South Africa for other purposes and I managed to see quite a bit of SA, mostly Jo’burg and Cape Town. SA is stunning.

In an interview you once described your style of play as “sick and aggressive”. Has this changed at all?

If that interview was from when I remember it to be, I have changed quite a bit since then. Poker is about adapting to your opponents and the poker evolution has occurred at an increased rate and as a result, many players have adapted the profitable aggressive strategy. Therefore, the same aggression I use to employ would no longer be correct in my opinion for my game. Darwin. Evolution. Cest la vie!

When you visit Cardiff do you go to Caroline Street for chips?

I assume you mean chippy lane? If so, then after a night out in town there is NO WHERE else to go.