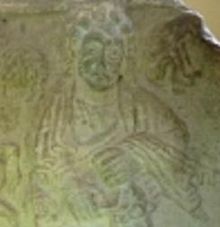 Saint Regulus sailed for many years from Constantinople. He had many adventures before he was finally shipwrecked off the coast of Scotland.

At the same time King Oengus, son of Fergus, had been having a terrible few years. As King of the Picts he seemed to be was constantly at war with Ireland, England and Wales. He was in Civil War with other Picts, fighting Northumbrians and the Gaels. Things weren’t going too well and he was psychologically exhausted. Being a ‘tyrannical slaughterer’ was hard work.

One night he had a vision of a company of angels who promised to send him an apostle of Christ to defend and guard him.

The following morning Oengus and Regulus met on the beach.

“You must be called Oengus, son of Fergus, named after the Celtic god of love and beauty; patron deity of young men and women.”

“Ah yes. That would be me.” Oengus replied, “But there is a reason I’ve been looking out for you?”

“How so?” asked Regulus warily.

“Last night I had a vision” the king announced.

Regulus’ heart sank. The last time he’d heard that sentence was four years ago and in the four years he’d endured all manner of hell sailing from Constantinople.

“Yes, A company of angels appeared to me telling me to build a church to keep the relics and staff of Andrew. They told me you would bring his bones and his club. I am to accept these from you, defeat all my enemies and build a magnificent church at Kilriment.” continued Oengus.

And so it came to pass as the angel with the sceptre at Constantinople had promised. Oengus prospered and built a church for Regulus at Kilrimont, Fife. Later called St Andrews.